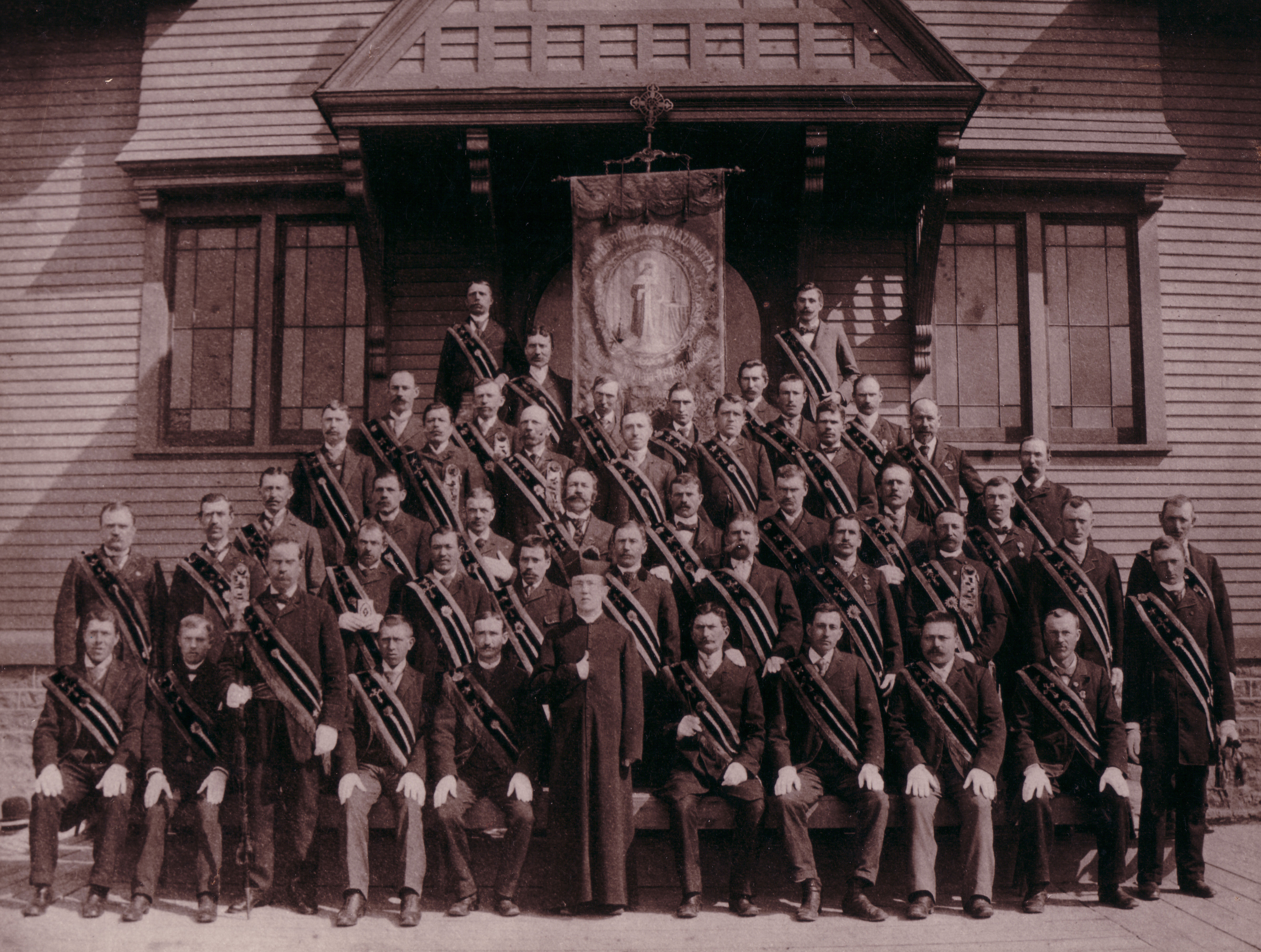 The Story of the Society of St. Casimir

In the spring of 1887, a group of perhaps two dozen men gathered in a meeting room at St. Michael’s Church and committed themselves to an ambitious goal: they would build a new church, one for their families and other Polish immigrants, a church that would serve as the unifying center for the Polish community in Rochester.

These were enterprising men who were not afraid of challenges. They and their families had left a homeland carved into sections by Prussia, Russia, and Austria-Hungary, traveled by train or cart or on foot to Baltic ports for a ten-day Atlantic crossing, and made their way to Rochester to seek employment in factories, garment mills, and an array of growing industries. Most of this early group of Roman Catholic Polish settlers came from Poznania, the German-controlled area of their homeland (and began arriving a decade later than Polish Jews who had established a congregation, Temple Beth Israel, in 1874). Because these newcomers spoke German, they were able to secure jobs in industries founded by German immigrants and they gravitated to the city’s German parishes

In the early 1880s, Polish families in Rochester were scattered among four German churches: St. Joseph’s, St. Boniface, Holy Redeemer, and St. Michael’s. Despite their knowledge of the language, however, the Poles did not feel comfortable in these parishes. Their homeland’s history of bitter conflict with Germany, along with their loyalty to Polish religious and national traditions, made assimilation into the German community unlikely. As they sought each other out for companionship, the Poles began to discuss the possibility of establishing their own parish.

So it was that on May 16, 1887, the Society of St. Casimir (Towarzystwo Św. Kazimierza) was formally proclaimed at St. Michael’s Church. There is evidence that an organization of that name existed earlier at St. Joseph’s Parish, but the society’s official origin can be reliably traced to St. Michael’s and the commitment to begin raising funds for a Polish church. As it happened, that same year the pastor and parishioners of St. Michael’s announced plans to construct a new, magnificent church of Gothic design on their North Clinton Avenue property. It is worth noting that the Poles’ decision to strike out on their own coincided with that announcement. Perhaps they were inspired by the German community’s initiative and resolve. Perhaps they felt that, if they were going to contribute to construction of a new church, it should be a church with Polish identity.

Little is known about the original membership of the Society of St. Casimir. Early accounts indicate that its officers were Adam Winiewski, Jozef Ciechanowski, and Jozef Wardynski. Others believed to be charter members were Wojciech Brumka, Konstanty Cyterski, Wojciech Kaczmarek, Michal Kowalski, Jakob Kucak, Wojciech Kwiatonski, Walenty Kwiatkonski, Szczepan Kwiatkowski, Mateusz Pacek, Walenty Paprocki, and Jozef and Walenty Wejt. Whether or not they were represented at the inaugural meeting, however, virtually all the Polish Catholic families in Rochester became associated with the society and supported its goal. In April 1888, the Union and Advertiser noted the “rapid growth of the Polish people in this city” and reported that there were “seventy families who have signified intention to join the new congregation.”

In their decision to establish a church, the Poles received encouragement and support from the pastor of St. Michael’s Parish, Father Fridolin Pascalar. A native of Wurtemberg, Father Pascalar had been in charge of the growing community of St. Michael’s since 1874. Much to his credit, he took on the task of assisting the Polish families while also overseeing construction of his parish’s majestic new church, which took two years to complete and cost $160,000 – a small fortune at the time.

Nevertheless, Father Pascalar quickly went to work on behalf of the Poles, contacting Bishop Bernard McQuaid shortly after the first meeting of the Society of St. Casimir. The society would like permission, he explained, to bring Polish priests from Buffalo to St. Michael’s to say Mass and hear confessions. When the bishop gave his approval in June 1887, the Society of St. Casimir became a community of Polish families worshipping at St. Michael’s Church while planning for their own parish.

Father Pascalar served as their treasurer, carefully recording receipts and expenditures in a ledger in which he wrote “In nomine Domini et in honorem St. Stanislai” (In the name of God and in honor of St. Stanislaus) across the top of the first page. The decision to name the longed-for parish after St. Stanislaus Kostka was made sometime before April 1888, when incorporation papers were filed with New York State. Lorenz Kafczinski and Antoni Ratinski signed the documents on behalf of the congregation, along with Bishop McQuaid and Father Pascalar. “St. Stanislaus Church of Rochester, New York” was officially incorporated on May 7th of that year – the seventh Polish Catholic congregation in the state. It was surely a momentous event for the Polish families.

In April 1888, the same month they filed incorporation papers for their church, the Poles purchased two acres of land at Joseph Avenue and Weaver Street from Sarah Foatz, a member of St. Michael’s Parish. At $3,500, the cost of the property far exceeded the Polish families’ savings, but St. Michael’s Church advanced them a loan for the full amount. Bishop McQuaid and Father Pascalar donated $25 apiece to kick off fund-raising, and the Polish families contributed $60 in the first collection for their building fund.

Little by little, the building fund grew, augmented by monthly collections taken up among the Polish families, contributions from the Society of St. Casimir, and rental of a frame house on the Foatz property. The congregation’s main expenses, paid from this fund, were $18 stipends for the Polish priests who visited from Buffalo, as well as steady repayment of the loan plus interest. By June 1889, the Poles had repaid more than $1,200 of the loan and had a modest balance on hand.

At the end of that year, the Polish families made a significant decision, one that would have a defining impact on the city’s northeast side. They became dissatisfied with the Joseph Avenue property, apparently because it was too close to already developed neighborhoods. They wanted their church built in an area not yet settled, a location where they could not only establish a parish but also purchase lots and construct homes, forming a Polish neighborhood.

An uncleared tract of land at the city’s northern line, extending 240 feet on Hudson Avenue and 350 feet along Norton and Salmon Streets, caught their attention. Town Lot 45, as the tract was known, lay more than two miles beyond the traffic and commerce of downtown Rochester. A remote stretch of grass, wildflowers, and fruit trees crossed by a small stream, the area was a half-mile north of Bernard Street, where the city’s horse-drawn streetcar pulled to its last stop. Beyond that point, Hudson Avenue was a dirt road that cut uninterrupted through the fields until it reached the Norton Street line.

To the Polish families, the advantages of Town Lot 45 were considerable. The area contained an expanse of land on which they could build a parish, a school, and homes – a community where their language could be spoken and their traditions maintained. The agreement drawn up by the owners of the tract, Alvin and Otto Block and August Blauw, acknowledged the Polish families’ plans for a settlement that would radiate around their church. In exchange for the lots on Joseph Avenue, Block and Blauw gave the Poles the parcel of land at Hudson Avenue and Norton Street, and agreed to sell the remaining land in Town Lot 45 exclusively to Polish Catholics for the next ten years (from Hudson Avenue east to North Street, and from Norton Street south to Sobieski).

Block and Blauw’s attractive offer was brought to the Polish families for a vote at a parish meeting held in St. Michael’s Hall on November 24, 1889. Nearly 100 men representing St. Stanislaus’ congregation took part in the decision, indicating their preference for the Joseph Avenue site or the Hudson Avenue location. Overwhelmingly, the voters chose Town Lot 45 as the site of St. Stanislaus Parish, receiving as part of the package Otto Block’s plans for the design of a wooden church.

The following summer, ground was broken for the church of St. Stanislaus Kostka, and its congregation planned a day of celebration for the cornerstone dedication on August 3rd. Led by the members of the Society of St. Casimir grouped behind their impressive banner, a crowd that reportedly exceeded 2,000 people (Rochester’s Polish families, members of St. Michael’s Church, and guests from St. Stanislaus Bishop and Martyr Parish of Buffalo) walked in the blistering afternoon heat from St. Michael’s Church to the site of the Polish parish. There Bishop McQuaid, attended by a dozen priests, blessed the foundation, side beams, cornerstone, and crucifix of the small church under construction. The bishop delivered an address in English, followed by remarks in Polish from Father John Pitass of Buffalo. At the close of ceremony, the bishop blessed the banner of the Society of St. Casimir, the group whose vision had made the joyful day possible.

St. Stanislaus Church was completed that fall, dedicated by Bishop McQuaid on November 16, 1890 – the Sunday closest to the feast of St. Stanislaus Kostka. Two weeks earlier, the Poles had repaid in full the loan from St. Michael’s Church and Father Pascalar resigned as treasurer, passing that duty to Father Teofil Szadzinski, a young priest brought from Poland by the bishop to serve as pastor of the new congregation. “The Polish Catholics of Rochester now have a church edifice of their own and are rejoicing in consequence,” the Union and Advertiser reported. “The pretty little church of St. Stanislaus . . . was tastefully festooned with evergreens and filled to overflowing with Poles who had assembled to witness the dedication of their church.”

The “pretty little church” on Salmon Street (promptly renamed St. Stanislaus) was a one-story chapel of hemlock lumber seating 400 people. Outside its walls, a settlement of homes would soon transform the fields of Town Lot 45 into a neighborhood as the number of Polish immigrants continued to grow. From two dozen men three years earlier, the Society of St. Casimir had increased to 100 members, and the 70 Polish families in the city had doubled to 145. Father Szadzinski’s first tally of parishioners, taken in October 1890, recorded a sizable congregation of 650 people: 375 adults and 275 children.

In a spirit of unity, with hard work and determination, the Society of St. Casimir had achieved the goal that was little more than a dream when they gathered at St. Michael’s Church in 1887. None of them could have foreseen the rich and colorful story of the Polish community in Rochester that would unfold over the coming decades, the history of local Polish Americans that radiates from their initiative. The value they placed on faith, family, and heritage -- and the solidarity and common purpose they exemplified -- form a legacy that we do well to celebrate and carry on.

The Friends of St. Stanislaus Foundation — a private, not-for-profit corporation with 501(c)(3) status — is not part of St. Stanislaus Parish. It is a separate organization formed to provide financial support for the ongoing work of maintaining the church.


DONATE
The Friends of St. Stanislaus Foundation — a private, not-for-profit corporation with 501(c)(3) status — is not part of St. Stanislaus Parish. It is a separate organization formed to provide financial support for the ongoing work of maintaining the church.
Copyright © Friends of Saint Stanislaus All rights reserved